Foncie Pulice didn’t set out to become great or famous, or even recognized. He didn’t think his job was anything special. And he was certainly not aware of the role he was to play in our province’s history. He was just a good person. And in the end, isn’t this exactly what we all wish to be? 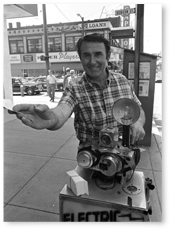 Foncie, Vancouver’s best-known street photographer, shot millions of photographs of people from 1935 through 1979 as they walked along Vancouver’s downtown streets, or beside English Bay, or just inside the P.N.E., or close to the entrance of Stanley Park. Getting your photo taken was part of the experience of going downtown for generations of Vancouverites and visitors to our town. You made sure to pick up your photo at a downtown storefront studio the next day if you’d been out on a special date, or were with your family, or your buddies, or your girlfriends. When you knew you were looking good, strutting your stuff down Granville Street, you made sure to get that Foncie Foto. The photos were taken head-to-toe
and they were great, mostly candid shots when you were just being yourself, walking along the street. And if Foncie caught your eye, he captured you smiling back at his friendly face.

Foncie was the only son of Italians immigrants Filomene and Francesco Pulice.  The early 1930s signaled the era of street photographers in cities across Canada. In 1934 Foncie was 20, living with his parents and four sisters in the 900 block Seymour Street. He was working as a house painter but thought being street photographer would be a better way to make a living, and a great way to meet girls. So Foncie got a job working for Joe Iaci, who owned Kandid Kamera Snaps at 842 Granville Street. His first assignment was to take photos at Hastings and Main. Business wasn’t great at that location and as time went on he was assigned a better location further west on Hastings Street, nearer to Granville. 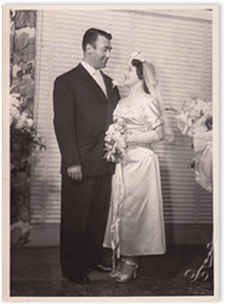 Following military service during the war, Foncie and his fiancée Anne bought a camera and became partners in Metro Photos with E.M. Brant. After a year Foncie bought Brant’s studio at 550 Granville and started his own street photography business, Foncie’s Fotos. Foncie took the photos; Anne developed and printed them. They married, had a family and Foncie worked long into the evenings, six days a week, year after year, rarely taking a vacation. He loved his family … and he loved his cars. He could be seen proudly sporting new models every few years. Foncie was a person who loved to laugh, spend time with family and friends, and party. He made people feel happy; he brightened their day. He was good to his family and friends. He was a person they could trust and turn to. 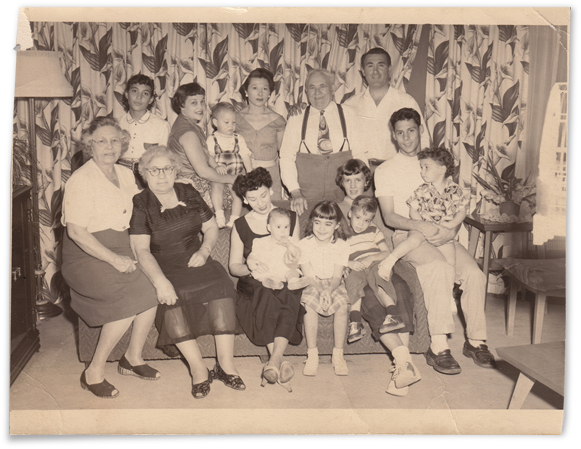 Granville Street was where he could be found most days. His storefront studio where you picked up your photos moved through the years, but it was always close by, on Granville or Robson Street. Before he bought the Electric Photos cart in the late 1950s from another street photographer, Cecil Hutchison, Foncie shot at night under the marquees of the movie houses for light.

Much of Foncie’s photography business was on a return basis, and year after year generations of families came back for their Foncie’s Fotos.

“He recalled smilingly that his best customers were local native Indian people. His wife Annie nods in agreement. “The very best,” she said. “I worked in the store, behind the counter and developing, and they’d come in with the slip for the pictures and they’d order half-a-dozen of this one and half-a-dozen of that, and poster-size pictures, all sorts of pictures.”

“I took pictures of their kids, whole families,” Foncie adds. “They’d come in droves. I’d see a bunch of people coming down the street. If there was a native person, I’d wait and take his picture. They were the best.”   from The History of Metropolitan Vancouver – Chuck Davis

Toward the end of his career, people started buying their own cameras and the street photography business was beginning to wane. In 1979, at age 65, Foncie was happy to retire.  After retiring, Foncie and his wife, Anne moved to Kelowna to be near their daughter, Diane. They lived there until they Foncie died on January 20, 2003 at age 88. Anne moved to Vancouver, to be near her son, Tony, and she died March 16, 2011 at age 97.

Vancouver memories that Foncie’s Fotos brings back to British Columbians are heart-warming. They are of loved ones long gone, the beginning of relationships now celebrating decades of marriage, family shopping excursions, Sunday walks in Stanley Park, Hi-Y initiations, long hot summer days, and wonderful teenage years of movies, dances, and cruising with friends on Granville Street. That was a time when downtown really was the centre of just about everything in Vancouver and people dressed to the nines when they went out. And they got their picture taken.

Maybe real greatness lies in how a person connects with family, friends and community. Foncie’s community was a growing western seaport, still young and still the hub of Canada’s frontier province. His legacy is his record of the little things, the small personal details of ordinary people’s trips to downtown Vancouver and what they reveal about a changing city.