Girls on the Town

Family in a Shoebox

The Look of Love

A Foncie Moment - 1:05
Remembering Me

Boys on the Town

My Dad the Chief

Using the street photography of Foncie Pulice, the half hour documentary traces a timeline through the heart of Vancouver telling a people’s history of changing life in Canada’s western-most metropolis.

He was a Vancouver landmark. In 1935 Foncie set up a camera on the sidewalk on Granville Street in Vancouver and for the next 45 years he snapped candid shots of people strolling by. He said that at the height of his business he was taking 7,000 to 8,000 photos a day! People bought the images he took of them as keepsakes of a visit, a time, or an event. 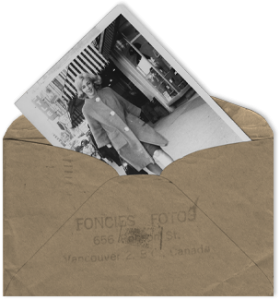 The film unfolds using these photos, and what we know of Foncie, his life and his family as he witnessed the tide of people flowing through Vancouver’s downtown sidewalks. Looking back on his body of work we can track changes in clothing, buildings, attitudes, demographics, and love. They capture a movement, a moment, in time and in the lives of British Columbians. They give importance to the ordinary.
FONCIE MOMENTS

Using the photographs collected on this website, these short films tell personal stories of the people who came to be at this intersection, Foncie’s Corner. The stories range from hemlines to hardships, from family to food, from love to war.