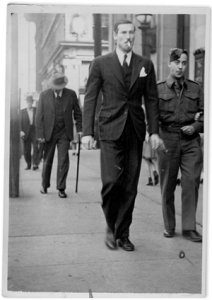 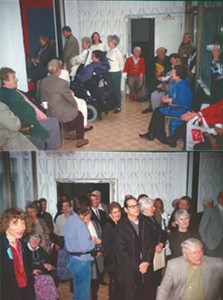 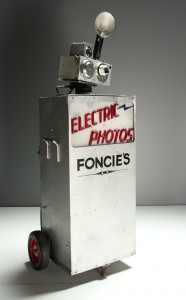 Our goal is to collect as many Foncie’s photos as we can in one place. We are also encouraging people who share their photos include heart-felt personal stories of life, death, trauma and joy, that when experienced together tell a larger historic story of life in British Columbia from the 1930s to the end of the 70s. There is cultural richness in Foncie’s photos and in the history they reveal in those flash moments on Granville Street in downtown Vancouver – over the course of almost half a century.

IN THE BEGINNING
Megan Carvell Davis was the person who seeded the idea for this project. For her it all started after her father, Sandii Carvell, died in 1998. Examining her father’s precious collection of photographs after his death, Megan came across a series of Foncies Fotos of her father taken between 1945 and the late 60s. Megan fell in love with the street photographs, and decided to explore the idea of making a film about the man who took them. When Megan sought Foncie’s approval for the project he
was delighted. 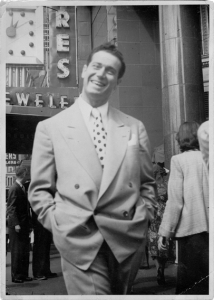 THE FIRST FONCIE’S PHOTOS GATHERING
Foncie’s old friend, Murray Goldman, hosted a Foncies Fotos Reception at the Vancouver Museum in November 1999. Foncie and his wife Anne were to be the honoured guests. Over 150 people attended, bringing their precious Foncies Fotos to be photographed for the documentary. But as it turned out, a rare fog descended on the Kelowna airport the day of the Reception, and all flights were cancelled. Foncie and Anne had to attend the Reception by long distance phone. When the guests at the Reception learned Foncie was on the phone, they spontaneously broke into ‘For He’s a Jolly Good Fellow’.

Production on the Foncies Photos documentary was temporarily halted in 2000 when Foncie complained of not feeling well. Unfortunately Foncie’s health continued to deteriorate and he died early in 2003 of a
respiratory illness. At Foncie’s funeral in Vancouver, Foncie’s wife Anne asked Megan to finish the documentary about her husband. But it wasn’t until Vancouver filmmaker, Melanie Wood, agreed to take on the Foncies Fotos project in 2011 that her promise to Anne was fulfilled. 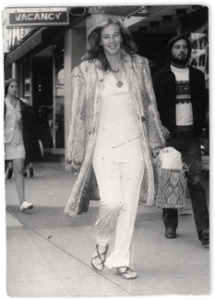 THE FULL FONCIE
Melanie Wood, Director and Producer of the Foncie’s Photos Project was intrigued with the possibility of what could be done with the photos and the project itself. Her next step was to talk to Murray Battle at Knowledge Network who has a keen interest in photography and history.  She showed him some of the photographs … and he was hooked as well. This Foncie’s Photos Project was begun on all its platforms; website, documentary film, documentary shorts.

THE CHALLENGES
Both Foncie himself, his wife Anne, and many other significant individuals involved with Foncie were no longer around to help tell the story.  So the challenge was to figure out how to make best use of the highly prized historic photographs. We decided to start with creating the website to collect photos still out around the province. We also wanted to hear the stories and memories that go with those treasured photos. This project will offer a voice to people with stories to tell – and a perspective on BC history from people who haven’t yet been heard.

AND THE MUSEUM VENUE
Joan Seidl, Director of Collections and Exhibitions at the Museum of Vancouver first learned about Foncie when she came across a crazy looking machine in the vault and learned that it was Foncie’s camera. Over the years, Joan encountered Foncie’s name again and again as she visited long-time Vancouverites in their homes, looking through their family albums that almost always included snapshots by Foncie’s Fotos.

The museum included Foncie’s camera and a small sampling of Foncie’s Fotos in MOV’s 1950s Gallery that opened in 2001. Now they will at last be able to present a full-scale exhibition about Foncie’s Fotos opening in June 2013.